In rugby, there are different types of footwear,  depending on your position and the type of ground.

Rugby boots with moulded studs are ideal for dry and synthetic grounds.

Made of more studs (usually between 10 and 16), they allow the weight to be distributed over a larger surface area to allow quicker direction changes.

Rugby boots with screw-on studs are ideal for greasy and muddy grounds.

Boots with screw-on studs are generally composed of 6 to 8 studs to benefit from a better grip on the ground and thus reduce the risk of slipping.

Hybrid rugby boots are the middle ground between moulded and screw-on studded boots.

Made of a dozen studs, the moulded ones in the center allow you to change direction quickly, while the studs screwed on the extremeties allow a better grip in the ground.

Ideal for players who only want to have one pair of boots.

Be careful however, if your club plays on synthetic field, make sure that screw-on studs are not prohibited (it can deteriorate the ground more quicly)!

Now, you know how to distinguish the different types of rugby shoes!

There are also two other criteria to consider when choosing your new pair.

In rugby, the majority of players favor low models to keep the ankle and the foot free.

But there are also high models that provide more ankle protection for better support and safety. For instance, this can be a very good choice for props.

Finally, there are rugby boots with hard toes that protect the foot in case of crushing, especially during rucks.

These boots can be a very good choice for props, hookers, locks and back-row players. 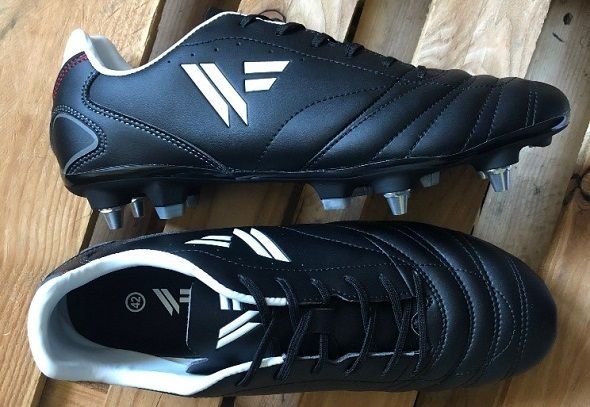 What is the purpose of rugby head guard?

Enter your email address to receive our Rugby Catalogue

Enter your email address to receive our Multisports Catalogue

Enter your email address to receive our Customer References Catalogue